Melton’s former parish church was dedicated to St Etheldreda and stands on a promontory overlooking the River Deben and the point at which it is crossed by the Wilford Bridge. The current building dates from the 14th century, but there are signs to suggest that it was built on the site of an earlier Saxon structure. Unlike most villages that grew around the focal point of the church, the domestic and commercial centre of Melton developed closer to the river crossing, leaving the now renamed St Andrew’s church almost a mile from the village. As time went on, the old church no longer met the needs of the villagers, and in 1868, the new church of St Andrew the Apostle was opened.

The old church reverted to being dedicated to St Etheldreda and remained in use as a mortuary chapel serving the cemetery it adjoins, which is still in use today. Changes were made so the old church would be fit for its new purpose: an apse replaced the chancel, and the north and south doors blocked, leaving only the only entrance through the tower.

The change of use to a mortuary chapel has played an unexpected part in Melton’s Great War story. Lining the walls, inside the tower, nine men are remembered by their battlefield crosses. Two more men, who died in hospitals in England from wounds suffered in France, are buried in the churchyard. But why are the crosses here? To answer this question, we need to look back to the vision and efforts of one man, Sir Fabian Ware, the founder of the Imperial War Graves Commission, now known as the Commonwealth War Graves Commission.

Sir Fabian was too old to fight in the Great War, so became commander of a mobile unit, under the British Red Cross, arriving in France in September 1914. In his role, he was witness to the sheer number of casualties and struck by the lack of a formal process to record the names of the dead and where they were buried. He felt compelled to ensure the final resting place of the war dead would not be lost forever.

Under his leadership, his mobile unit began to record and care for all the graves they could find. Their work was officially recognised in 1915 and became incorporated into the British army as the Graves Registration Commission or Grave Registration Unit. When recorded, each cross would have stamped metal strips put on them, naming the owner, their rank, date of death and the letters G.R.U.

Fabian Ware and others were also concerned about the fate of the soldiers’ graves post-war. They proposed to the government of the day that a specially-appointed body should be charged with the task of looking after the soldiers’ graves once the war was over. So, in 1917, the Imperial War Graves Commission was constituted through Royal Charter.

A committee was formed, lead by Frederic Kenyon, director of the British Museum. As the committee leader, Frederic wrote a report describing how the soldiers would be remembered. The two key points were:

1: The bodies would not be repatriated.

2: The memorials would follow a uniform design to avoid any distinction between class or rank.

The first cemeteries were built in 1920 with three eminent architects, Sir Herbert Baker, Sir Reginald Blomfield and Sir Edward Lutyens, taking a leading role in their design. Gertrude Jekyll was consulted about the planting schemes to be used within them.

In the process of building the new cemeteries and installing the uniform Portland Stone headstones, the wooden crosses and other grave markers were offered to the families of the men on whose grave they had once stood. The families paid for the markers to be shipped to them, and once received, it was up to the family to decide what should happen to them. Many were given to their Parish Church and were used as a temporary memorial until such time the village erected a permanent one.

As there was nowhere else to keep them, the crosses were either returned to the families or left outside in the churchyards and, through time, they rotted away. In Melton’s case, the crosses were stored inside the Old Church, preserving them for future generations to see. The stories of the owners of the crosses and their families are recorded in this website.

The two men buried in the cemetery are Claude Cale and Frederick Sutton.

In 1979, the Old Church was declared redundant and a group of people, lead by Philip Hope and Judge Bertram Richards, formed the Melton Old Church Society to manage and look after it. The Society was awarded a Heritage Lottery Grant in 2017 for repairs to the church in order to preserve the battlefield crosses. 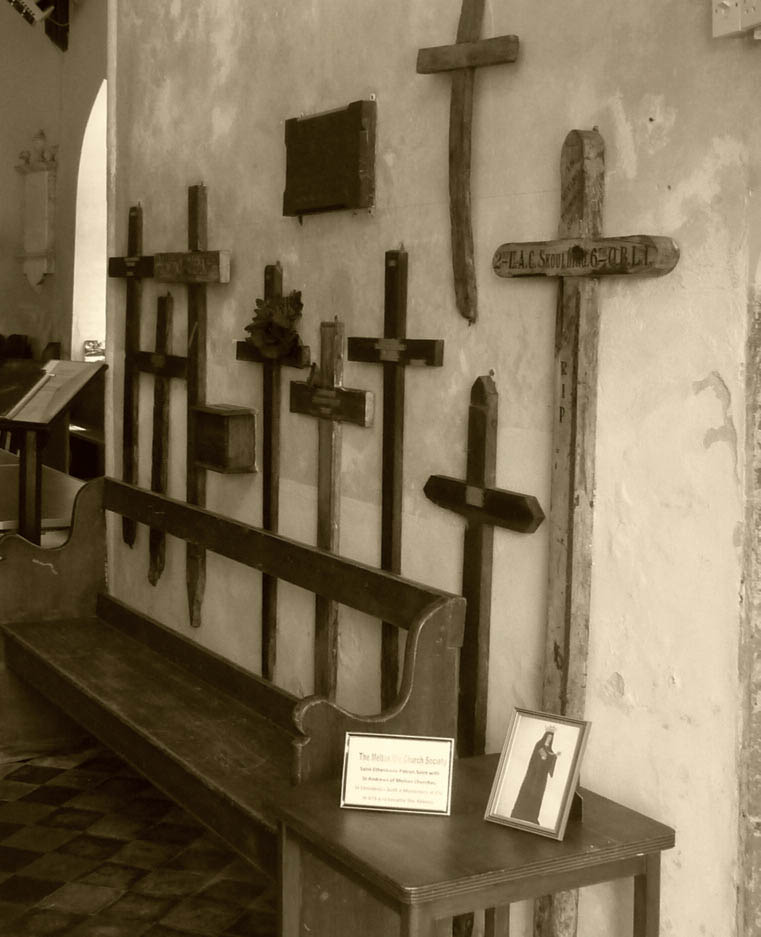 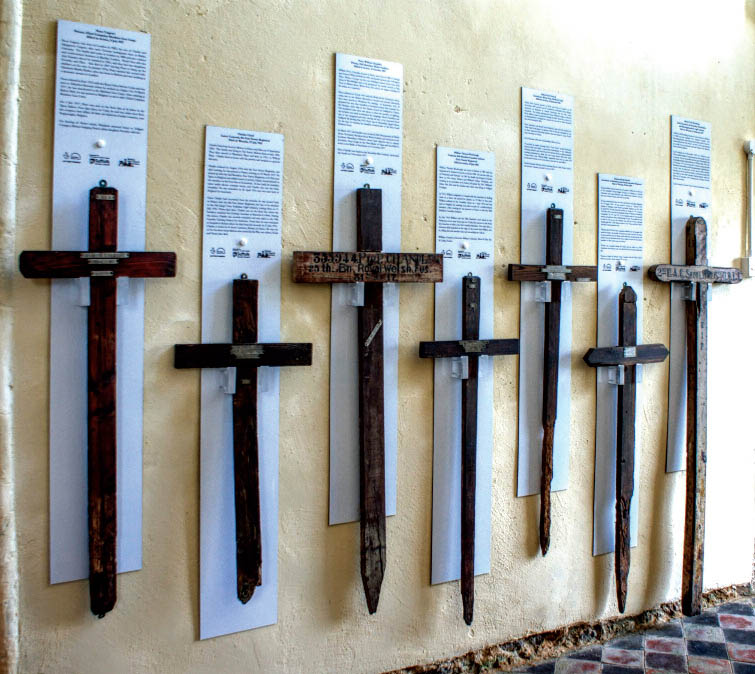 The crosses in Melton Old Church before and after rehanging

For more information about the Old Curch and the Melton Old Church Society, Click here

Details of a project to map all returned crosses from the Great War can be found on the "Returned From The Front" website.