FOXBOROUGH HALL and Farm were built circa 1810 for a local man named William Whincopp. In 1843, the estate was sold to Charles Walford and it became his and his sister, Mary Ann’s, home until she died in 1900 – Charles having passed away in 1879. The estate included Foxborough Farm to the north-west and Valley Farm to the south. After Mary died, the estate was leased out to several people including John Scott and Percy Crossman. It was Percy who offered the Hall to be used by the Red Cross during the war.

After the war was over, the estate was sold to Major Guy Noel Vivian and Norah Blanche Miller (née Quilter); the couple had been married in 1913 and had one son, Arnold, in 1915. Norah was the daughter of Sir Cuthbert Quilter of Bawdsey Manor, the proprietor of the Melton Pure Beer Brewery. Guy Vivian was a commissioned officer in the Grenadier Guards and was wounded during the Great War. It is believed that he spent time at Foxborough Hall Red Cross Hospital recovering.

The estate remained in the family, passing to Norah’s children from her first marriage as Arnold had been killed on war service in Italy in 1943. The Miller family handed the running of the farm over to the Suffolk Wildlife Trust in the mid-1980s and it has become their main Environmental Educational Centre.

A note on Foxborough Hall: The spelling of Foxborough Hall and the associated farm has varied over the years and is currently known as Foxboro Hall and Foxburrow Farm respectively. During the First World War, the Hall was used by the Red Cross as an auxiliary hospital for the convalescence of wounded soldiers. The majority of records found in the Red Cross archive give the name of the hospital as either Melton Hospital or Foxborough Hall. So for the purposes of this book, we have used their spelling, Foxborough, throughout. 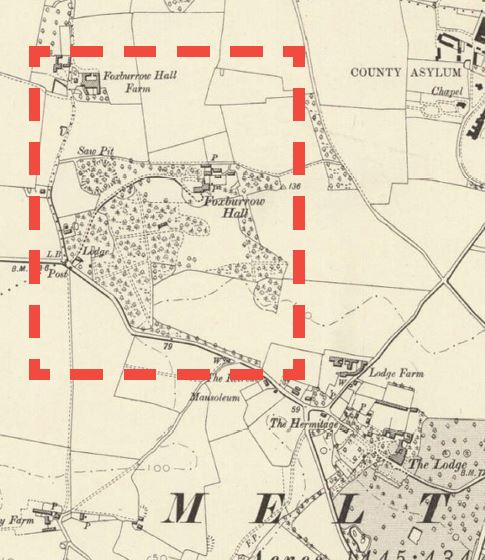