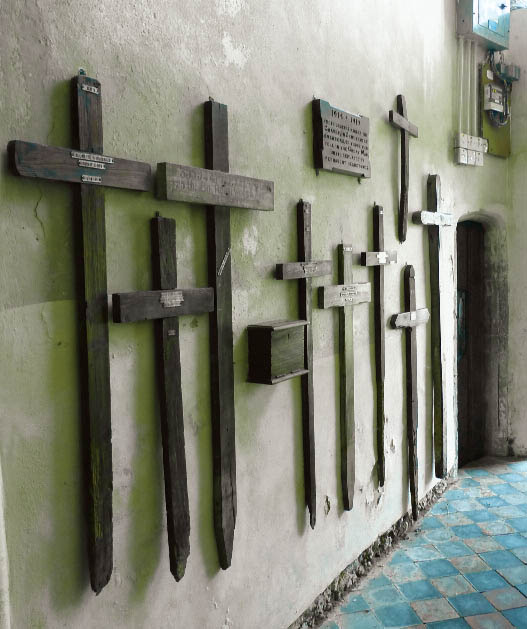 They are arranged against the uneven wall by the west door of the church.

Nine crosses, each hewn from rough wood with bright sprays of British Legion

poppies placed upon the crossbeams. The bases have been tapered, the wood

still stained with the mud of the battlefield where the soldiers fell. Lines and

knots rise and fall in the woodgrain, resembling contours on a map.

packing cases. These nine crosses were put together most likely in haste, but

with care. Stand up close and you can see where the timber at the ends of the

crossbeams has been rounded off, given shape. The name, rank and ID

hand; or else embossed onto tin strips and nailed in place. The epitaphs Killed

in Action, Died of Wounds are also recorded - a reminder that each life was

ended by an act of violence.

Grave marker. Tangible evidence of somebody’s death and in the absence of a

body to mourn, a focus for grief and tears. Relic. Shrine. Memorial. Curiosity.

Something used to light the way from this world to the next.

A booklet lists where the dead men are buried. Beersheba, Cologne, Bethune,

the land as it rises and falls, on and on, as if forever…

Look closely and remember them.