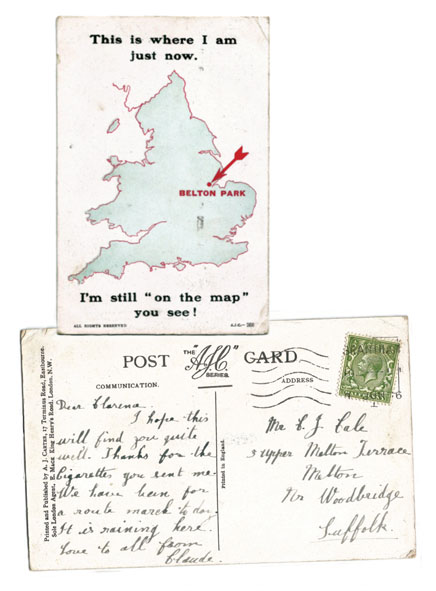 Claude Charles Cale, the second son of James and Amelia, was born in December 1896, in Melton, Suffolk. He worked as a blacksmith for Page and Girling the iron founders in Melton.

Claude enlisted in the services on 2nd February 1916 and was initially sent to join the 3rd Battalion Suffolk Regiment at the training camp in Felixstowe. On 12th May 1916, he was posted to join the Machine Gun Corps and started training with them at Belton Park. While there, his younger brother, Clarence, sent him some cigarettes. In return, Claude sent the postcard pictured to the left.

On 31st June 1916, Claude was sent to France as a member of 15 Company Machine Gun Corps, part of the 5th Division, and was deployed on the Somme. During that time, Claude would have played his part in the Battles of Guillemont, Flers-Courcelette - when tanks were first used on the battlefield – Morval and Transloy. In October that year, they were moved from the Somme to Festubert, near Arras.

In 1917, Claude and the 15th Company, Machine Gun Corps took part in the Battle of Arras from the 9th April until the 16th May. They were then moved north, to Belgium and the Ypres Salient, where, between 31st July and 10th November, they fought in the third Battle of Ypres – Passchendaele.

To the south, in the Italian mountains, the Italian Army suffered a major defeat at the Battle of Caporetto where, in eighteen days between 24th October and 19th November, ten thousand men were killed, thirty thousand wounded and two hundred and sixty-five thousand taken prisoner, many willingly. Morale in the Italian army was so low it was feared that they would be put out of the war. Claude’s machine gun company was posted to Italy with the 5th Division to help shore up the Italian defences; the logistics of moving a division was huge and it took over a month to get all the men and equipment to their objective. The deployment to Italy, however, proved to be unnecessary as the River Piave prevented the enemy forces from advancing any further into Italy.

In April 1918, as the German Spring Offensive took hold, the divisions deployed to Italy were sent back to France. Claude’s battalion had, by this time, been renamed as the 5th Battalion Machine Gun Corps – Claude was in “C” Company. The battalion was deployed to the Forest of Nieppe, in the Merville area, where the German army had broken through the Allied defences. On 27th April 1918, Claude was part of the team manning a Vickers machine gun defending the forest. The battalion war diary entry for that day says:

Claude was taken to the 14th Field Ambulance for treatment and, from there, to the 35th General Hospital in Calais. On 12th May, he was shipped back to the UK on board the Hospital Ship Stad Antwerpen and then on to Lichfield Military Hospital in Staffordshire.

Ten days after arriving at Lichfield Hospital, his condition was reported to his regiment’s record office. It said that Claude was in Ward 3 of the Surgical Division where he was dangerously ill, suffering from gunshot wounds. Claude did not recover from his injuries and died in Lichfield Hospital at 7.20 pm on 16th July 1918.

His body was returned to his family in Melton and the Woodbridge Gazette and Wickham Market Reporter (25th July 1918) described his funeral:

For his war service, Claude received the British War and Victory Medals.