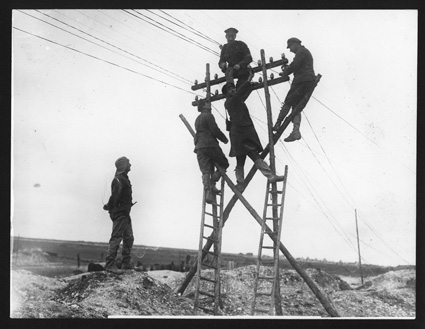 George Dickerson was born on 9th November 1885 in Hemley. By 1901, he was living with his elder brother, Arthur, and his parents, Jonathan and Mary Ann, in Bromeswell. In March 1904, he enlisted in the army as a full-time soldier, joining the Royal Engineers. His period of engagement was for three years, with nine in the “reserve”.

Based in Gloucestershire during this period, George remained there after his three-year tenure in the army ended. In 1911, he was in service, working as a chauffeur in Avening, Gloucestershire and two years later, on 6th September 1913, he married Emily Esther Rowles in the Church of the Holy Trinity in Brimscombe, Gloucestershire.

Following the declaration of war on 4th August 1914, George was immediately called up and, on 6th August, went to his assembly point in Bulford, Wiltshire. Eleven days later, George, now a member of the 56th Field Company, Royal Engineers, was on his way to France. Just over a month after that, on 18th September 1914, he was wounded and returned to England for treatment.

On 22nd January 1917, George returned to France with “BU” Cabling Section of the Royal Engineers who provided communications for artillery batteries. In November 1917, George’s section was moved from France to Italy and, in February 1918, he was transferred to join the 15th Brigade, Royal Garrison Artillery Signalling sub-section.

Although his battery was posted back to France in May 1918, George remained in Italy where, in October, he became ill with bronchial pneumonia. On 27th October 1918, George died while in the No.39 Casualty Clearing Station and was buried in the Giavera British Cemetery in Italy. He is also remembered on the Avening, Gloucestershire and Bromeswell War Memorials.

George’s family received the 1914 Star and the British War and Victory Medals for his war service.